Polina is a young, vibrant Christian who’s helping the young people of Russia to seek hope in Jesus Christ. “Russia holds the first place in teen suicide, and we are there to provide real hope for them. It can only be found in Jesus,” said Polina.

It’s cold. Countless Russians bundled up in coats and scarves walk down a snowy side-street of a Moscow neighborhood: just their eyes stare out into the winter day.

The scene frames a conversation with Polina Molchanova. Her breath can be seen as she talks of her aspirations as a journalist and a singer. When asked about her testimony, she lights up and pulls a warm smile from behind her scarf.

“It’s a great FEBC story,” she says in her charming Russian accent. Her blue-grey eyes sparkle as she explains how Jesus came into her life through FEBC.

In May of 2013, a classmate from Moscow State University invited her as a musical guest on her FEBC show. When Polina came to the station to be interviewed, she was overwhelmed with the love the team had for their listeners. As a journalism student, the high quality of the programming impressed her as well. A seed was planted and she began to listen to FEBC programming online. Just over a year later, she asked her FEBC friend to go to church. At 22 years old, Polina Molchanova’s heart was transformed by the Gospel and she accepted Christ as her savior. Currently a broadcaster for FEBC Moscow, Polina’s millennial identity, in a way, separates her from her coworkers. Still only in her early twenties, she hosts a show that reaches out to younger generations.

In living a life for Jesus, Polina stands as a bright light among a generation of Russians severely lacking in hope. Like so many of her contemporaries, the surface level qualities of the ubiquitous Russian Orthodox church pushed her away from a personal relationship with Jesus. Now through serving at FEBC, Polina is the perfect voice and friend for millions of Russian millenials. On her show just this week, Polina interviewed Natalya. The two young women are close in age – same blue eyes and soft brown hair. First, they talk of life and love: Natalya has gotten married. Polina asks if the couple had their ceremony in a church. Natalya says no. Polina sees an opportunity to bridge life and faith.

As she hears Natalya explain the common lack of interest in God that so many of her friends have, Polina’s heart breaks – she understands because she felt that too. But through Polina’s genuine love of the Russian people and FEBC radio, Natalya’s heart opens to a conversation – and Polina boldly shares the transforming power of Jesus Christ.

In 2016, we need an additional $7,000 for this year to produce programs that reach young people and young families in 2016. Please consider supporting programmers like Polina to help us reach millions of Russian and Ukrainian young adults. 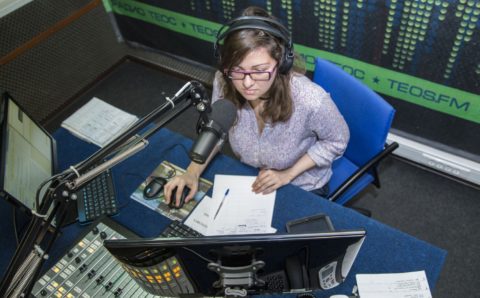 So many Russian hearts are cold without the Gospel. Your partnership helps ignite connections between the “Polina’s” of FEBC and the “Natalya’s” of Russia, supporting the warming hope of Jesus Christ.